Everything in these gathered pieces—vatic as poetry, confidential as prose—is a music broadcast from the imminent future, say, five minutes from now. Here, even memory has been subtly, irreversibly changed by events just now underway. The music is troubled and troubling. It is certainly true.

Balancing outward and inward looking, playfulness and vulnerability, strange intimacy and gauzy disconnection, Joanna Penn Cooper’s The Itinerant Girl’s Guide to Self-Hypnosis builds a moody and tender ladder. These lyric shorts recall the New York School with their arrays of noticings and exultancies and knobbly, vivid particulars, yet they also feel wholly fresh and surprising, and of Cooper’s own nimble and provocative making. This is a wonderful collection.

Review by Laurie Saurborn Young at American Microreviews and Interviews

“‘Itinerant’ defines travel as circuitous, looping, and repetitive. And so this piece of lyrical fiction is allowed—encouraged, even—to frustrate expectations of linear narrative, as if a villanelle rendered in prose. Reaching back, the speaker casts fresh eyes on her past. Reaching forward, she acknowledges the boundaries of her vision.”

“Maybe it’s the hypnosis taking effect, but with the famous Itinerant Girl as my guide, these poems affect me in the opposite way: they make me feel familiar to myself.”

Extract(s):  [W]hat did you discover about [the] line between imagination and excessive inwardness?

JPC: “. . . I’m learning that those are two sides of the same coin. It’s the old “your weakness is also your strength” deal. You have to make time for the inwardness and see where it leads you. Of course, this becomes increasingly challenging as life’s responsibilities present themselves, but that’s the artist’s job, to figure that out.”

Review by Stephan Delbos at BODY

“There are touches of Ginsberg’s “America” here, as there are touches of Frank O’Hara in Cooper’s most quotidian New York poems. But the achievement of this collection is that Cooper has fused these influences and others — along with a classical attention to feeling and memory — to a modern, personal sensibility. These are your stories too. The sight of a self-hypnotized girl is hypnotizing, is it not? This is a collection of prose poems that are personal not self-indulgent, sensitive not maudlin, and strong not callous. It is darkly delightful.” 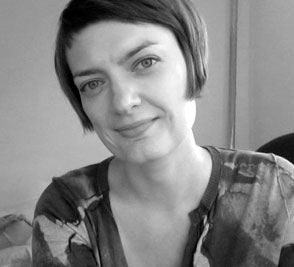 Poet and essayist Joanna Penn Cooper is the author of What Is a Domicile (Noctuary Press) and Crown (Ravenna Press), as well as two chapbooks from dancing girl press. Her recent chapbook When We Were Fearsome is available from Ethel Zine and Press. She holds a PhD in English from Temple University and has taught at Marquette and Fordham. Her work has appeared in The Academy of American Poets Poem-a-Day feature, as well as South Dakota Review, Zócalo Public Square, Open Letters Monthly, Poetry International, and other journals. Cooper teaches online workshops in flash memoir and lyric essay for the journal Creative Nonfiction. She lives in Durham, North Carolina. Visit her at joannapenncooper.net.

Nothing much happened today, unless you count seeing a hawk on a low branch in Central Park. Unless you count going to the Guggenheim and getting dizzy.

Haunted tries to happen, but I’m too dizzy to notice.

Strong iced coffee. Meeting a friend for lunch, I talk in a very animated way for thirty minutes before the coffee personality goes away again.

When we were children, we were all sort of dry and made of hair and limbs, with boys just a bit warmer and drier. Then we were teenagers and made of shoulders and hips and different hair.

Voice says, The hum and click braiding. Voice says, tethered in the paddock. (What’s a paddock?)

I call my grandmother and she says, Don’t ever allow yourself to get used to something that’s not good for you. Useful all-purpose advice.

For a few days, I skulk around the apartment thinking phrases like, It liked to have killed him. Some of my family might say such a thing.

Found in summer notebook: Stop having ideas about ideas. (Tethered in a paddock.)

Having always been this nervous scapula, knife-sharp eyes. Having never fully betrayed the music of the spheres. Having never let it move through her. Having found some salt of her salt on the lips of two to four others. Having held in her chest a delicate paper folding fan from a 1920s tourist town. Having tried. Having tried. Having been one with the birds. Having held her sleeping brother sideways when he was four, forgetting his age, his legs dangling like that. Having been held by others. Having observed and having been observed. The family mouth. The family heart in the family throat. The go look at the moon. Box hedges. Swimming pools. Elementary school smell of heated paint and dust. Having learned the stories. Having failed to learn them enough. The steel-toed boots. The frying pan. The great-great-uncle dead in Mexico. The great-great-uncle dead in the quarry. Plumbing the ancestral line. Plumbing the astral one. Alone with one’s books. Alone with one’s own green heart.
_____________________________________________

Dream of D:
Buries words in his backyard, 2-3 feet tall, made of some kind of foam. Primary colors. Reverse archaeology. He is energetic, preparing for a party. Everyone will wonder what words they’re walking on. It will be stylish and arbitrary. Unnatural but organic.

Dream of J:
By the road at dusk. There is a tree with a spirit. We have to hurry and take pictures of the great indentation in the earth before it gets too dark. It is too dim, too beautiful. He is resting in the hole. I am learning to use my camera.

Dream of C:
Coming into the room, his t-shirt wet with blood. Wanting a reaction. Suddenly not kind, not safe. It is a project. Blooming flower of blood. I have no way of leaving and must continue reacting.

Dream of J (2):
He won’t acknowledge that we’re in the same village. We walk along the path of tall trees separately, each a little amused, a little irritated. But then at the old stone house, resting on the white bed. Breeze in the sheer drapes. He comments on the numinous atmosphere. I taught him that word.

Is a crumpet a popover? Is a loon a heron? I look up “loon” on my phone and feel troubled. A loon is so obviously not a heron.

I swear a great white heron once followed me around St. Paul for a week.

It looked like a prehistoric thing, but with white feathers, the way its feet hung down like that. Appeared with the spring and the decision to move again floating over me. That pull. And there it was, floating past the classroom window, so that I stopped in the middle of teaching and shouted, looking, I imagine, somewhat hypnotized.

And then later that same day it appeared over my car as I drove home. Then again as I sat in my chair reading—this great huge kite with side-headed eyes, gliding right between my brick building and the next, its eyes level with my eyes.

Who can you tell this to in New York? No one.