“There is, it seems, an invisible question mark behind America’s Favorite Poem. What is it, who writes it? Jason Koo’s ruminations are capacious enough to consider a Jumbotroned Jay Z, the BQE and LeBron James’s elbow yet intimate enough to ask “whether I’ll ever feel like I have enough, whether I am enough.” America’s Favorite Poem is full irreverent swag and swagger, but it’s ultimately Koo’s exploration of what we consume and what consumes us that makes this book such a provocative and mesmerizing achievement.”

“How would Whitman have written if he were the offspring of Stan Getz and Kim Gordon? The answer is like Jason Koo, but not the entire answer—alongside the jazz and propulsion of these muscular poems is a commanding voice that is at once comical and intimate. America’s Favorite Poem is a brazen collection that swaggers as it sings.”

“If Frank O’Hara, Shakespeare and André Breton were alive today in Brooklyn, they might be Jason Koo. Jason Koo is alive today and he writes and I listen. I listen because he tells me something very important about what it means to be an American poet. Jason Koo is a live wire and the poems in America’s Favorite Poem are shoots of ocean-colored electricity from the center of a country that listens to itself. These poems bluster and ask us, “What’s the point of being ridiculous?” and then give us the answer just as quickly, because “Over and over and over again you dream.” This is an American poetry that isn’t afraid to dream again. So dream alongside of it and your new favorite poem just may be you again.”

The Broadkill Review interview with Kari Ann Ebert: “Poetry will always be relevant because—or maybe I should say if—it is desperately attentive to life.”

New Books Network interview with Jenn Fitzgerald: “With Whitmanesque, sprawling lines, Koo finds the minutia of introspective content and sound to populate his pieces. What initially appears conversational, contains multitudes. He faces the darkness with an innate humor that assures the reader, nothing is so awful that it can’t be laughed at. This extends to the poet’s lighthearted demeanor and ease with the world.”

Bad Asians interview with David Nguyen and Imran G: “Jason Koo and David discuss growing up in the midwest, sports’ influence on masculinity, not being a real doctor, and more!” 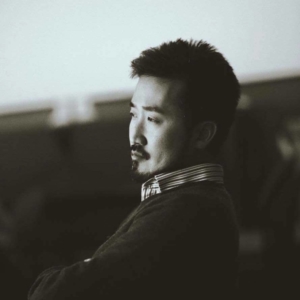 Named one of the “100 Most Influential People in Brooklyn Culture” by Brooklyn Magazine, Jason Koo is the author of the poetry collections More Than Mere Light, America’s Favorite Poem and Man on Extremely Small Island. Coeditor of the Brooklyn Poets Anthology, he has published his poetry and prose in the American Scholar, Missouri Review, Village Voice and Yale Review, among other places, and won fellowships for his work from the National Endowment for the Arts, Vermont Studio Center and New York State Writers Institute. An associate teaching professor of English at Quinnipiac University, Koo is the founder and executive director of Brooklyn Poets and creator of the Bridge (poetsbridge.org). He lives in Brooklyn.