Said No One Ever
by Gregory Crosby

Gregory Crosby is our go-to poet for cinematic deep-dives, apocalyptic parables, hot takes on century-old literary dustups, and lusty interludes of backlit longing. Said No One Ever collects a decades’ worth of breakneck verbal switchbacks and charged poetic insight—there is almost no subject pertinent to American culture that Crosby doesn’t square up. Here we are in the 21st Century, our lives balanced between myth and modernity, advertising and socializing, as Hollywood babbles on and our political scene skips through horrors like a creature feature on a busted reel—but still Crosby manages to plumb these depths without breaking stride or giving in, taking us on a memorable journey through art, language, history, and entertainment. 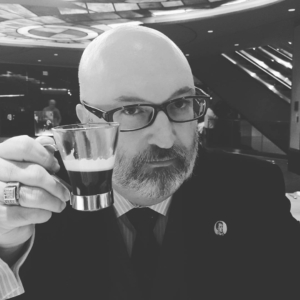 Gregory Crosby is the author of Walking Away from Explosions in Slow Motion and the chapbooks Spooky Action at a Distance and The Book of Thirteen. His poetry has appeared in numerous journals, including Court Green, Epiphany, Copper Nickel, Leveler, Sink Review, Ping Pong, and Hyperallergic. In 2002, as a poetry consultant to the City of Las Vegas, he was instrumental in the creation of the Lewis Avenue Poets Bridge, a public art project in downtown Las Vegas. His dedicatory poem for the project, “The Long Shot,” was subsequently reproduced in bronze and installed in the park, and was included in the 2008 anthology Literary Nevada: Writings from the Silver State (University of Nevada Press). He is an Adjunct Assistant Professor at the John Jay College of Criminal Justice and teaches creative writing in the College Now program at Lehman College, City University of New York.

Interview, 12 or 20: “The role of the writer is 1) to write and 2) whatever that writer defines, for themselves, as their role should be. Although whenever I come across this question, I think of Hawthorne: “The ends of literature are, first, the pleasurable toil of writing; second, the gratification of one’s family and friends; and, lastly, the solid cash.” (I suppose two out of three’s not bad.)”

Review by rob mcclennan: “Crosby’s deceptively straightforward lyric narratives provide original takes and insights into familiar pop culture subject matter, writing out film and comic book characters with a freshness and sequence of twists that routinely subvert and rejuvenate…[His] lyrics are fiercely smart and self-aware, playing with image and entertainment culture through lines both subtle and striking in their originality, allowing for a quiet, strange humour and series of odd twists.”

Interview with Yes Poetry: “Twenty or so years ago, when my burning ambition was to become a filmmaker, a slightly older friend who had actually worked on the fringes of the film industry said to me, “You know, even if you beat the odds to become a writer/director, you’re going to spend most of your life begging people for money.” That was like a light bulb going off—I realized that writing itself cost nothing, except time and effort and a few cheap notebooks, and that I would be better served simply writing for the page, where whatever I created would exist in and of itself. The other epiphany occurred when I started reading Anne Carson, and realized all the things that I thought I could only (or should only) do in prose could be done in poetry—that anything, really, could be done in poetry.”

Interview with Brooklyn Poets: On community: “I always hear my friend Dave Hickey in my head: “Whenever I hear the word ‘community,’ I know someone is about to be excluded.” I prefer the phrase “society of elective affinities,” but I guess that’s too many syllables.”

Interview with Rappahannock Review: “I have a weakness for odd or wacky titles that create some sort of expectation that the poem itself subverts, or that simply function as “grabbers.” I consider titles to be part of the poem as a whole, and I often write poems around a phrase that sounds like a good title.”

Gregory Crosby is available for Zoom appearances in those classrooms teaching his book. Teacher discounts for paperback and ebook copies of Said No One Ever are available by contacting Brooklyn Arts Press directly at info@brooklynartspress.com.