“My whole life I have thought the clouds were letters in a language I could almost understand. Seth Landman’s Confidence doesn’t help me understand that language, but it helps me understand the great beauty in the ‘almost.’ These poems are descendants of Williams’ Asphodel. They are poems that metamorphose upon rereading. Keep your eye on the weather, these poems say, it will change soon. And so will you.”

“Confidence tells of joy and suffering with equal grace, in fluid lines that glide from the banal to the enorm, as does, you know, life. These long, patient poems are casually astonishing. They lift me from this planet up into the night sky and then gently set me down again. They are as bold and as trusting as the book’s title suggests. The risks they take make me sometimes feel exhilarated, like “Here is a poet who doesn’t give a damn!” And then I read on, and realize a damn is absolutely given, that Seth Landman is a poet of great tenderness and compassion. Thank goodness for him. This book just gave my world a little more glow.”

“Seth Landman is a master of the soul’s secrets. In this series of three urgent long-poem wonders laced with shame, reverence, and a necessary wit (“is everyone the person / everyone wishes / everyone was / not tonight / not tonight”) these poems unabashedly, bravely—some might say devotedly—approach the great warble of love with gravity as they stress a Transcendental stance that would rival his heroes. Landman’s late-night whiskey-fueled whisper-song insistence on disclosing the great joys: “oh and one more thing / before you go // I love one more thing” puts one in a state of grace, of gratitude. “I don’t want to go to sleep” he writes, “but to pay for this in the morning”—and yes, yes, let’s stay up all night with Confidence.”

“A reverie of tears & love & fears, an attempt to make sense of our core confusions while talking to the sun & the sea & Van Morrison, a book written to attempt the world into something real, Seth Landman’s Confidence does for feelings what a ship does for humans in the middle of the ocean.”

“Landman succeeds in taking a few big, beautiful risks in these three heavily linked long poems…[T]he work reveals Landman as a master of conversational poetics and a deep thinker about words.”

“Landman suggests that the individual voice arises, and is only possible as, a form of response. The dialogic nature of speech, and even consciousness itself, is enacted in the style of the work as we begin to gather that “I” and “you” have become interchangeable, the speaker recounting details of his life as though he were another. Within this carefully orchestrated conversation, we learn about the speaker through his interactions with those around him. This seeing ultimately becomes a source of self-knowledge. The reader, too, is asked to situate herself within the book’s relational topography, renegotiating, then dismantling, the boundaries she has constructed between self and other, subject and object, viewer and viewed.”

“[R]eading Landman’s work is at times like sitting in a bar with a friend late at night, listening as he talks his way towards a realization. What makes Landman’s work extraordinary is that he doesn’t privilege the realization itself over the process of realization.”

“Confidence is, as its controlling metaphor suggests, a breakwater, a breakwater for ennui and melancholy regarding not only the world in which the speaker lives but writing that enervates it.”

“[F]luidity saturates Confidence, and when combined with other ingenious techniques and images, such as “moody liquid,” “coughing engine,” and “iron snow,” one comprehends the true quality of the book. In addition to quality, there is depth. If the reader were a Lacanian, for example, he or she would appreciate Landman’s equation of water and death, hence the “oceanic feeling” of the undifferentiated Real.” 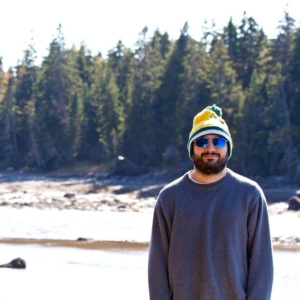 Seth Landman is the author of the full-length poetry collections Confidence (Brooklyn Arts Press, 2015) and Sign You Were Mistaken (Factory Hollow Press, 2013). His work can be found in Boston Review, iO, Jellyfish, Lit, and elsewhere. He received his PhD in Creative Writing and Literature from the University of Denver (2013) and an MFA from the University of Massachusetts (2008). He is an English teacher and basketball coach at The Putney School in Vermont, and you can find him online @slandman33.