A collection from one of America’s most intriguing poets, this is Noah Eli Gordon’s heftiest book yet, presenting a decade’s worth of honed, tightly-knit lyrics, poetic sequences, and prose experiments. These are beautifully convulsive, boldly contained poems, orchestrating from the musicality of syntax—the underlying allegro and tempo changes in the way we speak, write, and subsequently think—into an enactment, rather than a representation or description, of experience. Operating under Emerson’s assertion that “[e]very word was once a poem,” The Word Kingdom in the Word Kingdom argues for the necessity of highlighting artifice even in the face of so-called empiricism. Here a sort of intelligent, discursive speed is harnessed from rhetorical arguments swerving at the last moment from expectation. Whether under the influence of the word or the kingdom, one herein is held captive by the joy of continual surprise.
The Word Kingdom in the Word Kingdom
by Noah Eli Gordon

“Eileen Myles, Alice Notley, and Clark Coolidge were among the poets I looked up to as a youngster. When I think of poets from my generation who bring that same shock of living magic, Noah Eli Gordon tops the list. I’m always excited for his latest book, each a departure for unknown terrain. This is essential poetry, which is an urgent way of saying highly recommended!”

“I’ve known Noah ever since he was a flower on fire. This book burns.”

“[I]nside this kingdom there is a syntactical logic that radicalizes ontological concerns, a sensation of waking under marvelous pressure, hills of storks and swans and lions, various collusions and collisions mapping the breath-spaces between words.”

“With humor, anger, intelligence, & wonder, The Word Kingdom in the Word Kingdom is a quiet masterpiece. NEG writes with such a high level & understanding of craft & technique that you can pick any page at random & spend the rest of your life staring into it like a solar eclipse.” 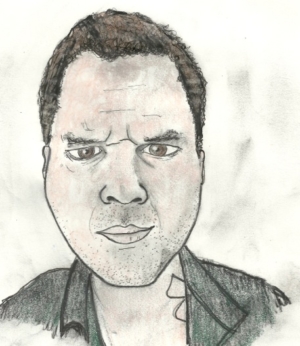 Noah Eli Gordon is the author of several books, including The Year of the Rooster (Ahsahta Press, 2013), The Source (Futurepoem, 2011), and Novel Pictorial Noise (Harper Perennial, 2007), which was selected by John Ashbery for the National Poetry Series and subsequently chosen for the San Francisco State Poetry Center Book Award. He is an Assistant Professor in the MFA program in Creative Writing at The University of Colorado–Boulder, where he currently directs Subito Press.

“This collection goes beyond formal experimentation and migrates into a kind of sentient poetics, self-aware lyrics that incorporate commentary and long passages of prose…The vocabulary proves challenging throughout, but Gordon rewards readers with verses rich in synesthetic imagery and stunning proclamations…Never ahead of itself or pretentious, Gordon’s work continues to cross boundaries and evolve.”

“Gordon addresses head-on questions about the possibilities of language, wondering where the distance between a word and its referent is greatest, where it collapses, and how poetry can inhabit those spaces and manipulate them….[A]n admirable call for more inventive and rigorous attention to the complex transactions of word, poem, and life.”

“This is not a pipe. The word is not the thing. The Word Kingdom in the Word Kingdom shares this sentiment. Noah Eli Gordon presents a modern treason of symbol. His words take flight in the very airplanes he describes. The trajectory is set by meta ontology. As the poems move forward and take shape, there is the sense that a message was thought of before the descriptions, that the writing has an agenda. However, there is a playful sense of tumbling through, that the words are allowing each other to create the next one. The message of origins of language and the etymology of our very ideas are shrouded in mystery. The attempt is at once novel and rooted in tradition. The Word Kingdom in the Word Kingdom runs along in a quasi-philosophical tone that is accessible while being fringe. It is interstitial poems for the modern era.”

“These poems are joyful and smart, and take the reader not only into physical places but into the places of possibilities of words themselves. As a poet, this is what continues to thrill me about words…they are places. And we only have to open the book to find where they can take us. For we belong to them, inside them. We, the poets, are the followers into their kingdom. Gordon has drawn the map into it and yet still constructs that fabulous sense of being lost, being free to explore. To roam this Kingdom. To not just read words on a page, but to experience them.”

“What charges these poems with continuous energy is their ability to surprise. That with each unpredicted swerve of the line, we’re left with an omnibus of possibilities. Reading Kingdom is like seeing the Hubble space telescope’s “Galaxies Galore” image from 2004 where within a sliver of space no larger than the hole of a straw we’re able to see millions of solar systems (thousands of galaxies). Endless possibility for contemplation.”

“The collection reads as though Gordon, over the years, has been utilizing short lyrics as a way to sketch out a series of commentaries on contemporary poetry, and this is simply the accumulation of pieces that could easily have been written as short essays. These are notes on form, structure and subject, playing off a level of cultural expectation in poetry, with the occasional playful jab or exploration at elements of his contemporary field . . .”

Flavorwire
With the release poet Noah Eli Gordon’s The Word Kingdom in the Word Kingdom, Brooklyn Arts Press is attempting something rare in small publishing — they are trying to change the way books are sold. Specifically, BAP, run by managing editor and publisher Joe Pan, is selling Gordon’s books via a “pay what you want” model, in the vein of Radiohead and Louis CK, albeit with some significant differences. To begin with (and perhaps surprisingly) BAP is selling physical and not digital copies of the book — you pay only a five dollar S&H fee along with whatever price you choose. And the obvious thing: Radiohead and Louis CK were able to implement such a model because they are famous. Although Gordon is not famous, Brooklyn Arts Press is hoping that word-of-mouth, the model itself, and the quality of the book, which is excellent, will help drive sales. And it already seems to be working.
Read More…