Fire in the Hero Building
by Tuff Sunshine 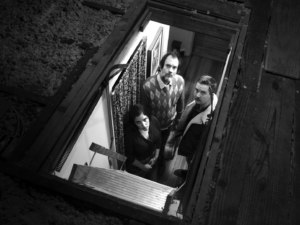 Fire in the Hero Building is the debut LP of Brooklyn indie-rock trio Tuff Sunshine. The band’s influences range from Classic Rock to the soulful, bluesy Stax recordings of the 60s-70s. Timeout NY calls the album “Emotive indie fare that skillfully fuses funky soul with wiry post-punk.” With a concentration on evocative lyrics and a direct, no-frills approach to production, the music is deeply engaging, catchy, genuine, and generous, and speaks to the band’s refreshing commitment to create music that defies easy categorization while remaining true to their roots.

Ghettoblaster: “I always loved the stories of how John Lennon would watch TV and take bits and pieces of commercials and ephemera from life around him and use that as a base for lyrics. It’s a way to have direction and still have room for your sub-conscious to work through.”

Tribune Chronicle: “I think the band is growing with every record, as I would hope would be the case. As far as sound, there is less concern to stay true to a blueprint or ‘ideal’ of what our sound is and was. With each record, I’ve been open to expanding and getting back to some of the things that I love, which means acoustic tracks, experimentation, and lots of back-up vocals and harmonies.”

We Close Tonight: “I like to think of it as “post-hip”—no concern for what’s the flavor-of-the-day and just the music we wanna make. Raw and loose, but sensitive and smart, too.”

Radio Free Brooklyn: Listen to a live performance and interview with Tuff Sunshine

Fire in the Hero Building

This is where he broke away

But this is where he broke away

Cough Your Baby Up

Thought I was at the end of my rope but
See, my rope it didn’t have no end so

If I could mix a metaphor for what we be
A balsa wood rowboat upon a stormy sea
1000 lotus feet a swaying walk of love
A lost message round the neck of a homing dove that said:

I Was a Shaker

I was a shaker I aint shakin no more

A was a shaker…I aint shakin no more

Did you notice that my hips be strung together with rings?
Here I barely walkin’ don’t remember a thing
I was tore up on the sidewalk outside Mr. Bing’s
They breaking my bloodfeathers as they clippin my wings

I was a shaker…I ain’t shakin no more

Sliding Through My Hands

And baby you are sliding through my hands

Baby you are sliding thru my hands

I worked myself up and I worked myself back down
I tightened it up but you see it finally came unwound
At least that’s how the dream had somehow made it seem
I lost my circulation so I tied off with a purse
I took a vow of silence and I broke it with a curse
Oh, how my knuckles creaked, oh, how my poor heart it went so weak

Unstable maybe but who’s counting the sheets?
Prone and weeping we collect in a pool at our feet
And here’s a bet—you’ll regret
Coming home all wet and
Scraping the sawdust off of your shoes
Lighting up in the cyclical blues
Saving face—by only casually keeping pace

I Won’t Go That Way

There’s a thimble full of faith that keeps the boat afloat
There’s a rhythm to the rockin’ as you mine the moat
There’s a 1,000 mile spiral that we all can coast
There’s a smile going viral feeding off the host

There’s a stroke is it luck or a break in the vein?
Can you tell the difference when the face stays the same?

Is it a fit you can’t quit or a fit to be tied?
Will you make it worth the while that the rabbit done died?

When you pinning all your hopes on a left hind foot

What keeps the heartbeat so goddamn sure?
What the meets the shaky feet at the hardwood floor?

As you spinning ever slower as you head toward the pole

But I won’t go that way

Won’t you take this offering? Won’t you take my keys?
Smite me right here in my prime for doing what I please
I’m wading deeper see me over my head
I’m playing three chords and me I’m playing dead