The point of departure was set by three world-renowned artists—Arnold Dreyblatt, Louise Höjer, and Wen Hui—each of whom approach archival work from different artistic perspectives. Working in Fredrikstad, these artists were able to create a gravitational field extending beyond the boundaries of the art world and Norway.

Various symposia, hosted by Norwegian Theatre Academy and the partner universities—Massachusetts Institute of Technology (USA), Muthesius Academy of Fine Arts and Design in Kiel (Germany), and York St John University (UK)—brought together artists and academics with a common interest in these three artists and in the broad subjects of archive, memory, and performance.

Within this book the reader will find essays, photographs, fiction, poetry, music, and other works of art documenting the project, its artistic productions, and the scholarship surrounding it. One will also encounter a complex project architecture, inviting the reader to get lost in the layers of Infinite Record’s reflective archival methods emerging from contrasting perspectives.

Click here to read the Introduction from the book.

Arnold Dreyblatt (b. New York City, 1953) is an American media artist and composer based in Berlin, Germany since 1984. Dreyblatt studied music with Pauline Oliveros, La Monte Young, and Alvin Lucier and media art with Woody and Steina Vasulka. He is a member of the German Academy of Art (Akademie der Kunste, Berlin) and is Professor of Media Art at the Muthesius Academy of Art and Design in Kiel, Germany. Dreyblatt utilizes digital data display and visual metaphors of transparency and reflection to represent the depth and diversity of archival collections and the processes of memorization, in permanent installations, and large staged interactive performances. Permanent public art works are on display at the HL Holocaust Center in Oslo and the Jewish Museum in Berlin. He continues to develop his unique work in composition and music performance. As one of the second generation of New York minimal composers, Arnold Dreyblatt has charted his own unique course in composition and music performance. Inventor of new and original instruments, performance techniques, and a system of tuning, his music has been performed by his own ensembles as well as the Bang On A Can All-Stars, Jim O’Rourke, Pellegrini String Quartet, and the Crash Ensemble, with a range of recordings available as well. During his residency in Fredrikstad, Dreyblatt has proposed the use of public display spaces in Fredrikstad to function as a public interactive platform in which student meetings, performances, installations, and presentations by invited guests take place. Through research and discussion, the project questions social, academic, and artistic forms of representation for local and individual memory.

Louise Hojer is a director, theorist, and dancer who has worked with the artist Tino Sehgal since 2005. She met Sehgal while writing her PhD in philosophy at the London Consortium, and soon left academia to work full time with Sehgal. In Sehgal’s art she located an aesthetic expression aligned with her own intellectual interests, giving her the means to both practice and theorize. She now travels around the world directing and participating in Sehgal’s exhibitions. As there are no written instructions for Sehgal’s work, and video and photography are strictly forbidden, Hojer herself, possessed as she is of an embodied knowledge of almost every piece, has become a living archive of Sehgal’s oeuvre. In this way Louise Hojer offers a unique entry point into Sehgal’s practice, as well as insight into the possibilities of embodied history. In her residency at NTA, Hojer used her unique position as an archive and a theorist to research the type of knowledge formation that arises from habituated practice.

Wen Hui is a pioneer of contemporary dance in China. Trained in classical Chinese dance, folk dance, and ballet, she studied in the 90s in New York with Trisha Brown and in Germany with Pina Bausch. Wen Hui worked closely with groundbreaking choreographer Ralph Lemon on his Geography project. In 1994, she founded the leading contemporary Chinese dance company Living Dance Studio and developed her unique vocabulary of precise movements and a specific style of interdisciplinary dance. In 2005, together with her partner Wu Wenguang, she founded the independent art space for performing arts, documentary film, video art, and photography CCD Workstation (Caochangdi-Beijing). It is the home of the Living Dance Studio and a documentary film archive. Wen Hui’s major choreographies are based on and inspired by documentary material. Through decades of artistic research she seeks a body language to express the complexity of overwhelming, painful, and fragile life stories. In 2011, for the first time, Wen Hui met her 83-year-old great aunt Su Mei Lin. In ongoing talks, Hui’s “third grandmother” develops insight into China’s 20th century through her personal stories, characterized by loss, pain, and mistreatments. Wen Hui’s documentary film Listening to Third Grandmother’s Stories became a success with European film festivals and helped build the base for her current dance piece. During her residency in Fredrikstad, Wen Hui continued to work on this unique film, as well as implementing dance and photographic material to create a unique installation for galleries and museums. 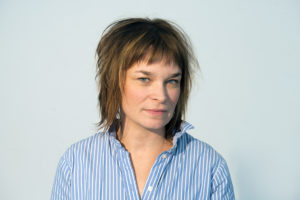 Karmenlara Ely is the current Artistic Director of Acting at Østfold University College/Norwegian Theater Academy in Fredrikstad, Norway. Before coming to Norway, Karmenlara taught theater and performance theory as a full-time faculty at New York University’s Tisch School of the Arts, where she holds a PhD in Performance Studies. Her research often examines the critical role of the obscene body in taboo breaking and the complexities of erotic pleasure and consumption in artistic processes. Recent public lectures on performance include seminars in New York, Norway, Iceland, Germany, and the UK. She collaborates as a performer, dramaturg, and scenic costumer on theater, festival, and performance works in New York, Northern Europe, and the Americas. She is the project leader for Infinite Record: Archive, Memory, Performance. Publications include essays in Performance Research and Women in Performance, and recently as co-editor with Camilla Eeg-Tverbakk of Responsive Listening (Brooklyn Arts Press 2015). 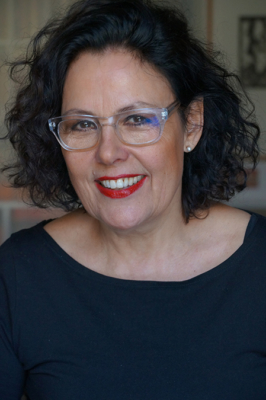 Maria Magdalena Schwaegermann is currently Associate Professor at the Norwegian Theatre Academy, Fredrikstad. She operates internationally as curator, lecturer, and dramaturge in academic, semi-academic, and purely artistic frameworks. She co-founded the Hebbel-Theater, Berlin (Germany), which produced and presented groundbreaking international artwork, and was for about 13 years its Deputy Artistic Director, In 1999 she additionally was Program Co-Director of the Festival Theater der Welt, Berlin. Between 2001–2007 she was Artistic Director of the festival Zurcher Theater Spektakel. Since 2008 she has been associated with various art platforms, some of which gained international acclaim. As curator, co-curator, and artistic advisor she designed and realized international art projects, e.g. the performance project ISTANPOLI in the frame of Istanbul Cultural Capital of Europe 2010 in Istanbul; the visionary and provocative exhibition TASWIR—Pictorial Mappings of Modernity and Islam in the Martin-Gropius-Bau, Berlin (2009–2010); and the exhibition WAGNER 2013 ARTIST POSITIONS—Exhibition and Events in the Academy of Arts, Berlin (2012–2013). She is the curator and dramaturg of the artistic research project Infinite Record: Archive, Memory, Performance.

The Idea of an Archive………Claire MacDonald

Norwegian Theatre Academy and Muthesius Academy of Fine Arts and Design Students’ Works, Based on the Essay Dictionary of Winds………Students

Ask me, I’m still here, and a Memory-teasing Game Based on the Dictionary of Winds………Anna Kohler, with Joan Jonas

The Art of Time………Erin Manning

The Archive of Everything that Exists in the World………Eleonora Fabiao

You Say, We Say………Claire Hind and Gary Winters

Click here for sample chapters and art work from the book.