Take This Stallion
by Anaïs Duplan

“I have never before read a book like Anaïs Duplan’s Take This Stallion. His major talent is recognizing the self in the other, making for poems that flow forward in a tone of oneness—is oneness a tone?—poems that make evident an ever-expanding world by opening themselves up into that world. This debut does what poets in their fifth or sixth collections are still trying to figure: it balances the intellect, image, music, and emotion in ways so unfamiliar that a blurb couldn’t possible characterize the work.”

“For all the ways we pad our language with qualifier, with apology, with hedge, Anaïs Duplan is antidote. His poems are talkative, inappropriate, obsessive, and sexy. They put everything on the table and if there’s no table, he erects one: of the mechanic’s lobby, of men selling peanuts at her door, of the George Washington Bridge underpass, of the ocean. Sometimes the poems hang the air with obsession like tangential rope. like snake. Sometimes they pick up their skirts and dust the ground. Duplan’s work is at once this methodical, and this unhinged. He confirms a fear that drones and Kim Kardashian have more to do with our therapy sessions than we wish. And then at times, he puts all that away, and the poems wash out their mouths. This first collection is, after all, of this world. And though it might be haunted by a voice that says “Don’t be too cocky,” on nearly every page it talks back. Heroic, inspired, and smart: these poems are on their own two feet, saying “I’m always cocky.””

“Take This Stallion is the sound of a generation finding its voice; it is a sound of a generation that has more rapidly than any since the generation that came of age in the 1960’s turned the world on its head, both exposing the faithlessness of the generations before it, and reifying the promises those generations made. Listen: “When she was lost to them/ they took to striking/ each other over the head with empty fists,/ striking until blood ran freely in the city/ ditches. All of this sounding like horses thundering/ into each other, peeling themselves/ off of each other, and thundering/ again. The whole city, this sound.” In Take This Stallion, the whole city is made new, and the maker who re-makes it is new, and the songs they sing as they work are the new songs.”

“One way to measure a really good poet or novelist is that they make you want to write. They may make you feel a little bit jealous and even competitive. That is what Anaïs Duplan’s first book of poetry, Take This Stallion, does. Even as you read it, you may find yourself spontaneously composing lines or riffing on [his], finding something you can build upon to link your own experience.”

“Duplan stirs the banal into a melting pot of the bizarre and morbid, creating an enticing concoction for those with eclectic palates.”

“Popping with pop culture. Zinging with Net slang. Formless yet formed. Slick and rough. Dating-sites and Netflix and Martha Stewart and Kendrick Lamar and Kim Kardashian and TMZ and ENVY and funerals and coke and religion and love and names become algebra and no one knows where they stand except on the cusp of a new paradigm, a new aesthetic—Take This Stallion is a force of poetic nature.”

“This book is about intimacy, wounded and weaponized. Here hearts are flipped inside out, exposing equal parts longing for affection and longing for revolt. The awkwardness of romance in the late Anthropocene is balanced with the possibility—dare we say the promise? Yes, we can—of riot, that tenuous algebra of precisely how many clinched fists will tip us toward a derailed train.”

“This book is a force. I mean, a force. It’s bold, brazen, experimental in form and loud in language. But for all of that – it’s attacking quality – it remains soft and vulnerable. It is hooves and also fur, and they are synced in constant movement.”

“Duplan has shown you what it is to be barren, what it is to be alone yet connected, and when the end comes, it hurts. Yet we aren’t losing something when we finish the book; quite the opposite. What Duplan allows us to take away from [his] poetry is ineffable, but can be, in essence, described as a will to live despite the things that may come for us. Duplan has seen a dark world and the things that it holds. He has lost people, and he has struggled with his perceptions of himself. He can separate the futile actions from the ones that have purpose. He can turn his telescope to a brighter world.” 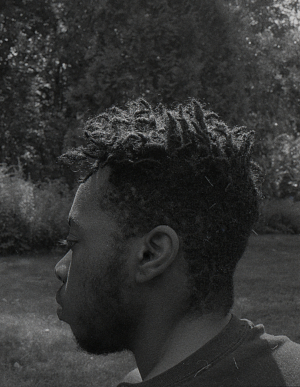 Anaïs Duplan is a trans* poet, curator, and artist. He is the author of a book of essays, Blackspace: On the Poetics of an Afrofuture (Black Ocean, 2020), a full-length poetry collection, Take This Stallion (Brooklyn Arts Press, 2016), and a chapbook, Mount Carmel and the Blood of Parnassus (Monster House Press, 2017). He has taught poetry at the University of Iowa, Columbia University, Sarah Lawrence College, and St. Joseph’s College.

His video works have been exhibited by Flux Factory, Daata Editions, the 13th Baltic Triennial in Lithuania, Mathew Gallery, NeueHouse, the Paseo Project, and will be exhibited at the Institute of Contemporary Art in L.A in 2021.

As an independent curator, he has facilitated curatorial projects in Chicago, Boston, Santa Fe, and Reykjavík. He was a 2017-2019 joint Public Programs fellow at the Museum of Modern Art and the Studio Museum in Harlem. In 2016, he founded the Center for Afrofuturist Studies, an artist residency program for artists of color, based at Iowa City’s artist-run organization Public Space One. He works as Program Manager at Recess.