Daniel Borzutzky’s new collection of poetry, The Performance of Becoming Human, draws hemispheric connections between the US and Latin America, specifically touching upon issues relating to border and immigration policies, economic disparity, political violence, and the disturbing rhetoric of capitalism and bureaucracies. To become human is to navigate these borders, including those of institutions, the realities of over- and under-development, and the economies of privatization, in which humans endure state-sanctioned and systemic abuses. Borzutzky, whose writing Eileen Myles has described as “violent, perverse, and tender” in its portrayal of “American and global horror,” adds another chapter to a growing and important compilation of work that asks what it means to be both a unitedstatesian and a globalized subject whose body is “shared between the earth, the state, and the bank.”

The Performance of Becoming Human
by Daniel Borzutzky

“Like any good satirist, Borzutzky considers his subjectivity with the same lens he applies to the systems he critiques, and The Performance of Becoming Human is an apogee of that inquiry. Since The Book of Interfering Bodies, Daniel Borzutzky has been the fabulist we most need because he’s unafraid to detail the truth of our oligarchy, without pedantry. In his figurative world our bodies are forced through privatized meat grinders, but funnily in the way that all dark horror stories trigger our gallows humor. I’m thrilled every time Borzutzky brings a book in the world, learn the most about reality from him.”

“In this canticle for the age of listicles, Daniel Borzutzky performs a new political poetry in the crucible of “overdevelopment,” when “The city has disappeared into the privatized cellar of humanity.” Here, the socially engaged bro-poet is mercifully broken, relieved of his epic monumentality, and with it of a range of foundational fictions (nation/family/language/subject), leaving behind these gut-cantos (songs/fragments), detestimonios of a spectral self, at once buzz-fed and cankerously/cantankerously embodied. (You can’t spell “Neruda” without “nerd” and Canto General never rocked “The Gross and Borderless Body.”) The ugly majesty of these prose blocks echoes the windswept expanses of neoliberal Chile and Chicago, their dead and their debt, their surrender and struggle. To read “this book that is a country deposited not in your heart but in your mouth” is to confront becoming human as speech act, as language game, and to know the freedom and the terror of doing so. The painbeauty of Borzutzky’s virtuoso, multi-register flow (abject punchlines included) is also a counter-flow to the death drive of capital, sentences for a radical sentience.” 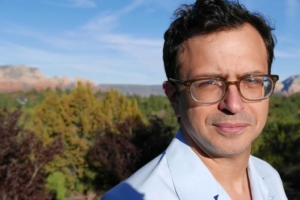 Daniel Borzutzky is the author of The Performance of Becoming Human, winner of the 2016 National Book Award for Poetry. His other books and chapbooks include In the Murmurs of the Rotten Carcass Economy (2015), Bedtime Stories for the End of the World! (2015), Data Bodies (2013), The Book of Interfering Bodies (2011), and The Ecstasy of Capitulation (2007). He has translated Raúl Zurita’s The Country of Planks (2015) and Song for his Disappeared Love (2010), and Jaime Luis Huenún’s Port Trakl (2008). His work has been supported by the Illinois Arts Council, the National Endowment for the Arts, and the Pen/Heim Translation Fund. He lives in Chicago.

Publishers Weekly
This is one of contemporary poetry’s most cogent documents of humanity and suffering in the 21st century, one born out of an impossible but necessary struggle to reconcile existence with destruction, excess with deprivation, and alienation with proximity.

Steve Healey, in Boston Review
A relentlessly and unapologetically brutal vision at the center of which is the human body being violated, maimed, tortured, exploited, judged, imprisoned, surveilled, and otherwise unjustly controlled. The voice of the speaker moves from moment to moment through that of a refugee, a migrant worker, a child laborer, a prisoner, a dissident, a victim of racism or “ethnic cleansing,” a victim of police brutality, a victim of rape, a victim of corporate profiteering.

Paul Cunningham, in DIAGRAM
Maybe now more than ever would be a good time to reconsider the sanctity and professionalization of poetry…Maybe it’s a good time to reconsider our culture of prized writing. Maybe it’s a good time to be a skeptic. To scrutinize the media. To listen to the voices of those who feel silenced. To step up the spectacle. To re-evaluate. To respond to privatization with “horrible licks” in excess. Sure there’s a gore to Borzutzky’s poetics, but, in a way, I believe Borzutzky’s layering and arranging of underworldly voices, figures, and language gives rise to something positively, ominously alive. A covert message spelled out in the entrails spilled throughout the book.

Tyrone Williams, in Lana Turner
[This book’s] tension between outrage and jocularity is less a function of intention than an effect of the logic of capital (which generates resistance and, as one of his books notes, capitulation). For poets, then, resistance may indeed be futile since they provide, however unwittingly, the catharsis of self-righteous anger without which the streets might erupt in violence directed at the state….The Performance of Becoming Human takes on the form Borzutzky believes most appropriate for our age: the virus, in its digital, biological and aesthetic forms. These are not, however, separate pathogens; the logics of capital and agitprop presuppose ruthless competition for “attention” among these and other modes of socialization and acculturation. Thus, in “Archive,” Borzutzky writes, “I am writing a story of love in the time of data fascism”….Borzutzky excoriates the neoliberal apotheosis of private ownership….The centrifugal sweep of Borzutzky’s rage culminates, finally, at the global: ecological disaster….In the end there is, for Borzutzky, only one “solution”: A glitch in the system // Nothing that can’t be fixed // By a full-scale overhaul // Of absolutely everything.

CE Miller, in Bustle
The Performance of Becoming Human is an edgy and sometimes-violent collection about how politics destroy people, how systemic and economic violence destroys communities, and how humans are defined by—and in spite of—the borders they face.

Constance Grady, in Vox
The repetitive clauses and the bloody images build upon each other relentlessly, creating a world in which we are all complicit and from which there is no escape and no redemption. The Performance of Becoming Human is not an easy book to read, but it is a powerful one.

Carleen Tibbetts, in American Microreviews & Interviews
Borzutzky’s poetry is part Orwellian nightmare and part politicized call to arms regarding the very real state of the world. The bodies in his collection are bordered. They are have been conquered and militarized. They have been dumped into gulags to fester […] Borzutzky manages to instill a hope in his readers that although we remain trapped in our putrid and failing bodies, we, too, will succeed in our spiritual mission to persevere.

Nicholas Hayes, in Your Impossible Voice
Borzutzky is not the first person to direct our attention to liminal spaces. Yet the spaces he draws attention to have an imminent exigency. This book is of our times and for our times. One hopes the exigency will diminish; one suspects it won’t. Perhaps such examination will allow our social wounds to form smooth, silvery scars before they become gangrenous.”

Joanna C Valente, in Luna Luna
“Daniel Borzutzky makes writing about bureaucratic nation-states interesting. We, as the reader, observe communities utterly destroyed, and we are left to question why and how and why and how humans let this happen. In particular, the bay of Valparaiso merges into the western shore of Lake Michigan, which exemplifies the horrors that happen on American soil and international soil alike—and how they are connected—and drawing the lines between the personal and political poignantly. This is a collection not to miss.”

JC Hallman, in The Brooklyn Rail
What I loved best was the volume’s secret insistence that we should not think of it as a typical book of discrete poems, presented in that all-too-familiar scroll show of a poet’s various secretions, pressed down onto a series of microscope slides. No, there is something more, some controlling arc or vision.

J.G. McClure, in Center for Literary Publishing
The book, with its unflinching look at our corporatized lives and its condemning critique of the poet’s role in it, makes a serious charge. We can choose for ourselves how to answer—but we each must answer.

Spencer Dew, in decomP
Borzutzky is aware that “creative consultants waiting to turn this misery into poetry” are always waiting in the wings. This is in keeping with the broader Orwellian inversions and distracting gimcracks of the late capitalist police state he describes, where we sext and Skype and surf the experiences of others far away as authorities instruct us when to laugh and when to applaud. The dystopia here results from the very juxtaposition that is the hope of those migrants dying of thirst in the desert: a world of lack versus a world of absurdly overflowing plenty; a world numb-drunk on accumulated resources versus a world heightened in awareness by its own starvation. But that already romanticizes and reduced; Borzutzky is too clever, in any case, to speak for those who lack.

Bomb Magazine Interview: “When the Homan Square revelations came out in the fall of 2015, my thinking started to change. The economic violence in Chile was tied to state violence. In order to enact brutal privatization measures they needed to first scare the shit out of the population so that nobody would be in a position to protest. I think we were starting to see something like this in Chicago. Extreme policing, especially of minority communities, has been working hand in hand with radical privatization policies. It’s a weapon used not just to kill and oppress communities of color, but also to enact economic policy. I’m certainly not the only person to have noticed this, but I don’t think it has been written about a lot.”

Chicago Tribune Interview:“To write “unpolitical” poetry is also a political choice. Where you position yourself in relation to the communities you occupy and observe is a political question. I’m not sure I could be lyrical or poetic or even interesting without writing politically about the things I care about. So, I’m not sure I’m serving two masters, since I can’t really envision myself writing a poetry that is not political.”

PBS Newshour: Can a poem make the world a better place by documenting the darknesses around us?

Elle, These Are 4 of the Most Important Books of 2016: “Writing for me creates a form of political and social memory, a memory that hopefully draws attention to those individuals that power forces try to make invisible…”

Poetry Society, Daniel Borzutzky on “Lake Michigan Merges Into The Bay of Valparaiso, Chile”: “I live in Chicago, and my family is from Chile.  I’ve written before of the ways in which Chicago is a Chilean city: a city that has copied Chile’s extreme approach to privatization of public services as well as the Pinochet dictatorship’s approach to policing and torturing its own citizens…”